Late March, sun beating down, I surveyed my garden in the 23 degree heat and decided a barbecue was in order.  It would be to celebrate my birthday, the decking and newly completed steps (well I know how to live).

Invitations were written.  We wandered the neighbourhood enjoying beers in the sun with friendly folk.  Gardens shone everywhere.  It was summer.

Then came April in a mad fury.

Then they were flattened

In the space of a single month I lost two greenhouse covers, shredded by wind.  The neighbour’s Eucalyptus deposited a large branch on my daffodils, squashing them flat.

Oh, and the day of my barbecue it snowed and hailed and snowed and hailed – but half an hour before guests arrived the sun came out and the fire could be lit.  It was far too cold to be outside for long, but hey – it stopped snowing and we used hailstones as ice cubes.

The effect on the garden has been strange – outside has coped better than all my tiny seedlings inside.  Apart from wind and falling tree damage, the outside is blooming on and is still ahead of England (bizarrely).  Rhododendrons have been and gone, lillies are over a foot tall, late tulips are out, lettuce and spinach are romping away.  It’s looking extremely splendid, though I say so myself. 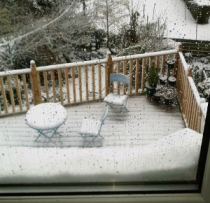 Inside is a different story. I know seeds can’t grow backwards (though if they did, mine have) but they have been definitely checked.  Chillies have obviously been chilly and they have stopped in their tracks.  Generally there was less growth in all April than probably a single week in March.  Some little guys look so spindly and sad I’m thinking of writing them off and doing some resowing at the weekend.

Weather hey?   Lets hope that March wasn’t the only summer we’ll get and that the rapidly lengthening days will resume a temperature in which seeds will again start growing!  Otherwise a serious shopping trip to the garden centre and nurseries will be in order!

But the fact its currently snowing in May isn’t a good sign!

APOLOGIES IF YOU’RE SEEING A SPAM ADVERTISEMENT BELOW